This article is about SMG4, the YouTuber. You may be looking for his web series of the same name. For more meanings, see SMG4 (disambiguation).

”My style of videos back then were ten times more simpler back then, because of the software I was using. I could only use text and, uh, cool looking transitions.”
― SuperMarioGlitchy4

Luke Lerdwichagul, known online by the alias SuperMarioGlitchy4 and more commonly known as SMG4, is a YouTuber, web animator, Garry's Mod and Super Mario 64 Machinimist as well as the founder of Glitch Productions. He is responsible for the creation of the web series SMG4 as well as the animated series Meta Runner and Sunset Paradise.

SMG4 started YouTube in 2009 and posted glitch compilations on games like Super Smash Bros. Brawl and Super Mario Sunshine, having become infatuated as a child about how glitches worked in games. He eventually began making Super Mario 64 Machinima in 2011, inspired by the likes of Megaman765, MATTHEWGU4 and MarioMario54321.

Due to tradition from other machinimists before him, SMG4 appears in-universe as a palette swap of Mario's model, with a blue hat and shirt, white overalls and gloves and brown shoes. He is the one of the main protagonists of his own series and appears in many other machinimists’ videos.

In his own series, SMG4 is usually depicted as one of the few sane characters in his videos. He first appeared in the episode Account Loss, where he deal with a mysterious figure stealing his YouTube account’s password after the former tricked Mario. He also has a deep-seated a rivalry with a man known as SMG3.

As of September 2020, Luke's YouTube channel sits at over 4 million worldwide subscribers - a record-breaking total for Super Mario 64 Machinima channels. While SMG4 doesn't have close contact with the Super Mario 64 Machinima Community anymore, he remains as an inspiration to many machinimists. Indeed, following his rise to fame, multiple SM64 Machinima channels and series have been created based off of his own series or taking inspiration from him and his characters. 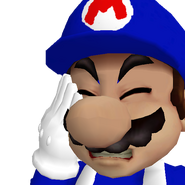 One of SMG4’s old profile pictures.
Community content is available under CC-BY-SA unless otherwise noted.
Advertisement