SM64 Machinima Wiki
Register
Don't have an account?
Sign In
Advertisement
in: Characters, Machinimist who joined in 2017, YouTubers, Male Characters

SuperG64 is a YouTuber and Super Mario 64 Machinimist who joined YouTube in 2015 with 8000 subscribers as of June 19, 2021. On Twitter, he sits at over 1000 followers. He is known for recreating popular online trends and memes in Super Mario 64, as well as creating his own original Super Mario 64 Bloopers.He began creating Super Mario 64 Bloopers and livestreams in 2017. When he first joined YouTube, his dawned a color code featuring a light-blue cap/shirt, red overalls, and black shoes. Shortly after it was modified to include better shading, black gloves and dark blue shoes.

Super is usually portrayed as a laid back, careless person who tries not to get involved with anything, however, willing to fight for his life for the sake of his friends. He always keeps his Evoker on him. With it, he can summon his persona, Eyerok, to fight if needed.

Ever since first awakening to Eyerok, his amount of supernatural ability has increased. He doesn't need Beacon's starpower to help fight or fly, either. Super's main elements he fights with are Fire and Wind, with fire being a specialty. He can also use buffs to increase himself or another person's stats for a set amount of time. Other abilities include God's Hand, where in exchange for health, Eyerok can slam down on the enemy (like the boss fight in sm64) and Nocturnal Flash, where in exchange for stamina, Super can (try to) make any foe become dizzy for a short amount of time, then follow up with stronger attacks, dealing more damage. Megidolaon is a special case, it's a powerful almighty skill that cannot be reflected, absorbed, or blocked. The only way to avoid it is to run. Other passive skills (skills that dont hurt the enemy but benefits the user) include Fire Amp and Dizzy boost, which increase damage and odds for inflicting dizzy respectfully. Without Eyerok, he can only use fire-based attacks. (Think of generic energy balls in sm64 gsfs, for Super those would be made out of fire.) He also wields his sword as a melee weapon, which he can add a fire affinity to temporarily for extra damage.

A render of Super's skillset in a Persona 5-esque style 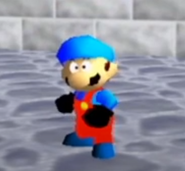 Another one of Super's Color Codes (Used in late 2017, was changed out for his current one in the middle of the video "Zeus' Quest for Kraft Dinner")
Community content is available under CC-BY-SA unless otherwise noted.
Advertisement