OiramOiram12345 originates from the Reverse Dimension, being the counterpart of MarioMario54321. He first appeared in a cameo at the end of The Fury of CandyCao7, where it was revealed he was possessing CandyCao7. He later appeared in OiramOiram12345 and the Shadowreavers as the main antagonist. He first appears on the top of Peach's Castle, planning to murder the Mario Bros. while his counterpart was on vacation to avenge Oiram and Igiul's defeats. For his plan, he teamed up with Oiraw and Igiulaw, Wario and Waluigi's dopplegangers, and the Shadowreavers.

During the Shadowreavers attack on the castle, OO12345 managed to claim the castle as his own and hired the Gold Team to redecorate the castle in his literal image. However, the protagonist managed to gain power from the Lightreavers and with the help of MarioMario54321, defeated OiramOiram12345. Despite this, OO12345 was destined to return.

At some point in his life, during the Dark Star incident, OiramOiram12345 arrived in the Mushroom Kingdom and stalked the Mario Bros, during the events of Mario & Luigi: Bowser's Inside Story. Upon seeing the Dark Star, he attempted to steal it when he discovered the Dark Star X in Bowser's body. Recognizing it as being more powerful than the original Dark Star, he stole it instead to register all the dopplegangers to it, granting them immortality. Taking the Dark Star X back to the Reverse Dimension, the entity was registered as a Reverse Counterpart and the Light Star X was created. Thus, OO took the two stars back in time over 12 billion years and fused them into Star X in the trajectory of a massive comet in order to splinter them one last time. After a conflict with the Time Police, OO12345 set the events of Star X's creation in a time lock, preventing time travelers from being able to enter it.

MM used the Light Star X and the Light Star to become MarioMario54321 X and engaged in battle with his doppleganger. Despite OO12345's best efforts, MM54321 stablized the Dark Star X and the doppleganger army was defeated and sent to Dimension X, bringing an end to OiramOiram12345's reign. However, in Mario & Luigi: Beanventure, the Dark Star X returned.

OiramOiram12345 (mispelled as OiramOiram54321), appeared in SMG4 on occasion for cameo appearances. He often appeared in the Ssenmodnar series, fighting MarioMario54321 in Bowser's Sky Arena. He was, along with MM, knocked off the arena by Bowser accidently. OO12345 was also present in Super Mario 64 Commercial: Join the Evil Side, where he helped advertize SMG3's group. 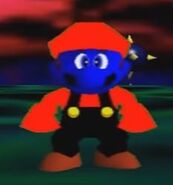