SM64 Machinima Wiki
Register
Don't have an account?
Sign In
Advertisement
in: Characters, YouTubers, Machinimist who joined in 2007,
and 7 more

This article is about MarioMario54321. You may be looking for another YouTuber named MM.

Ricky, better known online as MarioMario54321 and originally known as Mario64, is a YouTuber and Super Mario 64 Machinimist who started creating videos on YouTube in 2007; with his first video being titled Mario Jumps the Castle!. He became most famous for his storytelling, inspiring SuperMarioGlitchy4 and his plot-driven machinimas such as the Doppleganger Arc. Since he started, he has become one of the most influential YouTubers in the SM64 Machinima Community.

Ricky was born on November 14, 1992. As a child, he was known online as Mario64. Mario64 was a repeated visitor (dubbed a Super Koopa) to the website Lemmy's Land, where he was eventually caught stealing art and promtply was banned. After a while, he started YouTube and became MarioMario54321. He uploaded his first video; Mario Jumps the Castle! on August 10, 2007, becoming one of the earliest Super Mario 64 Machinimist. As of 2020, he has over 73,000 subscribers and is the owner of one of the longest running SM64 Machinima channels on YouTube.

MarioMario54321, due to tradition, appears in many of his own videos as well as those of other machinimist. Like most others in the SM64 Machinima Community, MM is depicted as a palette swap of Mario's model. His color code features him with a gold face, hat and clothes; as well as white overalls, grey gloves and blue shoes. He is usually one of the main protagonist of his series, with his most important in-universe appearance being the leader of the resistance against the dopplegangers, and fighting for the fate of the multiverse with his own dopple OiramOiram12345. He appears frequently in videos created by multiple fans and friends. MarioMario54321 also appeared in SMG4 from 2011 to 2016, with his most prominent role being in Super Mario 64 Bloopers: The Blooper Competition.

The Cosmic Crystals and The Moon World series[]

Into the Fourth Dimension series[] 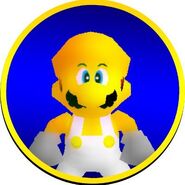 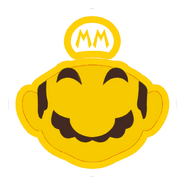 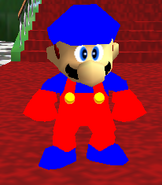 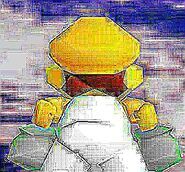 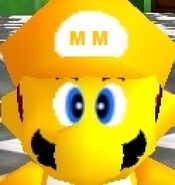