Luigi is a fictional character and the brother of Mario, serving as the deuteragonist of Nintendo's Super Mario franchise. He is generally depicted as a kind hearted, yet timid, protector of the Mushroom Kingdom. While heroic and well known like his brother, Luigi is usually cast in Mario's shadow, with many characters forgetting his name, including on occasion the main antagonist, Bowser.

In spite of not appearing in Super Mario 64, Luigi is one of the most commonly recurring characters in SM64 Machinima. Several custom models, including a beta model from Super Mario 64, have been used to depict him in-game. Along with that, Luigi would often be shown with a color code applied to Mario's model.

Another fan-made model for Super Mario 64. 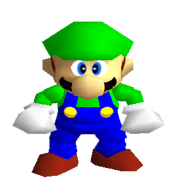 Luigi as an infant, known as Baby Luigi.

Luigi in the Paper Mario series. 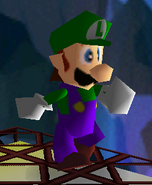 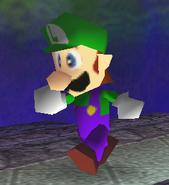 Luigi as he appears in Japanese version of Smash Bros. 64